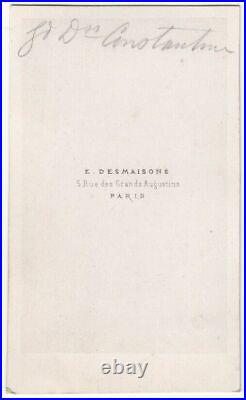 Due to the current health pandemic and limited access. RUSSIAN ROYALTY CDV GRAND DUCHESS ALEXANDRA IOSIFOVNA. 1860-s Imperial Russia – Grand Duchess Alexandra Iosifovna, wife of Grand Duke Constantine Nikolaevich. The photo measures 2 1/2″ by 4″, and is in excellent condition. Desmaisons out of Paris, France (blind stamp also in lower left corner of image). ID’d on reverse in pencil. SIZE : Approximately 2 3/8 x 4 inch. In the summer of 1846, she met Grand Duke Konstantin Nikolayevich of Russia when he visited Altenburg. He was the second son of Nicholas I, Emperor of Russia, and Empress Alexandra Feodorovna, née Princess Charlotte of Prussia. Konstantin stayed for a few days at Alexandra’s father’s castle. His visit there had been arranged by Alexandra’s aunt. Grand Duchess Elena Pavlovna. Who had been born Princess Charlotte of Württemberg. Elena and Alexandra’s mother were both descended from. Frederick II Eugene, Duke of Württemberg. Elena was married to. Grand Duke Michael Pavlovich. The younger brother of Tsar Nicholas I. Elena Pavlovna was therefore Konstantin’s aunt by marriage and Alexandra’s aunt by birth. Elena was a strong influence over Konstantin, who admired her intellect and progressive views. She had literary interests and was musical, founding the. And the young Konstantin often spent time at Elena’s home and salon in. Konstantin was intellectual and liberal, whereas Alexandra was conservative and rather high spirited. Although their temperaments differed, they both shared an interest in music, and enjoyed playing duets at the piano. Konstantin was captivated by Alexandra’s youthful beauty: she being tall, slender and attractive. He quickly became besotted, and was eager to marry her I don’t know what is happening to me. Just one thought moves me, just one image fills my eyes: forever and only she, my angel, my universe. I really do think I’m in love. However, what can it mean? I’ve only know her just a few hours and I’m already up to my ears in Passion. She was only sixteen and Konstantin nineteen; they were engaged but had to wait two more years before they could finally. This rare CDV photo is in good condition. The photo may have: light wear, scratching, toning, fading, minor staining, spotting, soft or dinged corners. Nice image, with great display potential. See the picture we provide. Most often, our merchandise is old and or used. We will try to describe these items to the best of our ability and would not misrepresent anything intentionally. We list the defects, problems and imperfections we see on the items, but we can sometimes overlook something or make a mistake. This item is in the category “Collectibles\Photographic Images\Photographs”. The seller is “imperial.antique” and is located in this country: US. This item can be shipped to United States.