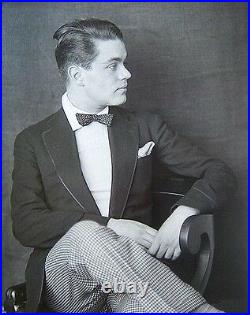 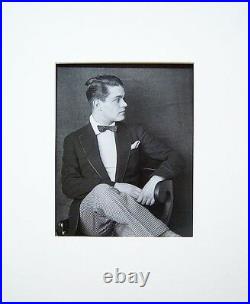 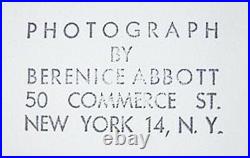 BERENICE ABBOTT Signed 1928 Original Photograph -“René Crevel”. Abbott took up photography in 1925 while working as Man Ray’s photographic assistant in his. It was there that she made her first portraits, using his equipment. She made this elegant portrait of the dapperly attired Crevel at her studio on the rue Servandoni in Montpanasse. The photograph, in which Crevel is posed in profile against a plain backdrop, captures his far-off gaze, delicate features, and an errant cowlick, revealing an introspective artist with an eccentric edge. Identified by André Breton in his first Surrealist Manifesto as a performer of acts of “absolute surrealism, ” Crevel participated in the earliest Surrealist dream experiments and developed a bizarre and imaginative writing style with which he critiqued the capitalist bourgeoisie, the Catholic Church, and post-WWI European society in numerous books, essays, and poems. In the 1930s Crevel battled tuberculosis and became increasingly devoted to the principles of Communism. On the eve of the Parisian “Congress of Writers for the Defense of Culture, ” which he helped organize, the ailing 34-year-old committed suicide citing his disgust over the political quarreling between the Surrealists and the Communists. This extremely rare original photograph is entitled. And is signed in pencil by the photographer on verso, “Berenice Abbott”, with her’50 Commerce St. New York, 14, New York’ credit stamp on the verso, in generally good condition aside from a few light scratches (seen only at extreme raking light). It measures 8″ x 10″ and is matted for a total size of 14″ x 17″. Estate of Glenn Goldman. Glenn Goldman was the owner of the internationally-known. Independent bookstore called Book Soup. Gallery retail prices are always much higher. The item “BERENICE ABBOTT Signed 1928 Original Photograph -René Crevel” is in sale since Sunday, May 30, 2010. This item is in the category “Art\Art Photographs”. The seller is “skf-fineart” and is located in Los Angeles, California. This item can be shipped to North, South, or Latin America, all countries in Europe, all countries in continental Asia.