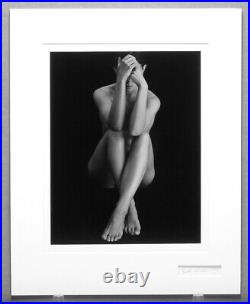 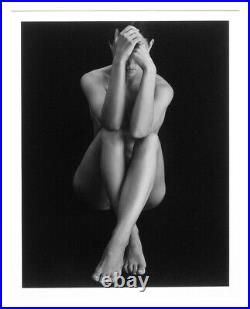 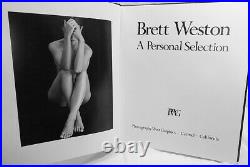 MAKE ME AN OFFER AND LET’S MAKE THIS BEAUTIFUL PHOTOGRAPH YOURS! Unlike his father, Edward Weston, Brett is not well known for his nudes, other than his underwater images. This Brett Weston nude offered here is in my opinion, by far, his most classic nude study and one that’s most sought after. In Brett’s 1986 book, Personal Selection, he chose this image to be the frontispiece opposite the title page. BRETT WESTON SIGNED 1975 CLASSIC NUDE STUDY 10″X13.5″ PHOTOGRAPH. Printed in the 1975’s, a stunning example of Brett’s most famous nude study. Signed and dated on the lower right corner of mount. Mounted on 15″x18″ museum board, over-matted with 16″x20″ museum board, with widow for signature. There was a small chip of the emulsion chipped off along the top and I had Ryuijie work on it. It’s now not noticeable viewing straight on, only at an angle under raking light. Brett Weston (19111993) was born in Los Angeles, the second son of Edward Weston, and perhaps artistically the closest of the four Weston boys to their photographer father. In 1925, Edward removed Brett from school so the thirteen year old could become his apprentice in Mexico City. Surrounded by revolutionary artists of the day, such as José Clemente Orozco, José David Alfaro Siqueros, Jean Charlot, and Diego Rivera, Brett began making photographs with his fathers small Graflex 3¼ by 4¼ inch camera. Early exposure to modern art impacted Westons sense of form and composition, and his early images of natural and man-made subjects reveal a strong sense of design. He appreciated how the camera transformed close-up subjects, with photographys black-and-white tones further obscured an objects appearance. This tendency toward abstraction characterized much of his work throughout his nearly seventy-year career. Between 1950 and 1980, Brett Westons style changed sharply and was characterized by bold, abstract imagery. The subjects he chose were, for the most part, not unlike the nature studies that interested him early in his career: plant leaves, knotted roots, mud cracks, and tangled kelp. He concentrated mostly on close-ups and abstracted details, but his prints reflected a preference for strong contrast that reduced his subjects to pure graphic form. Please note that the actual image size could be different than the paper size listed above as this darkroom made photograph was handmade by the artist and might have required some custom cropping or trimming. The item “BRETT WESTON SIGNED 1975 CLASSIC NUDE STUDY 10X13.5 PHOTOGRAPH PUBLISHED” is in sale since Saturday, June 5, 2021. This item is in the category “Art\Art Photographs”. The seller is “russlevin” and is located in Monterey, California. This item can be shipped worldwide.