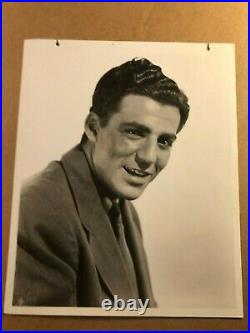 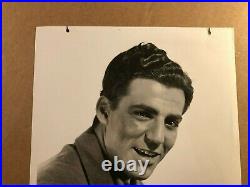 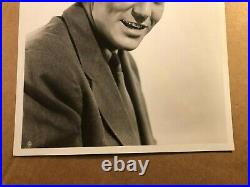 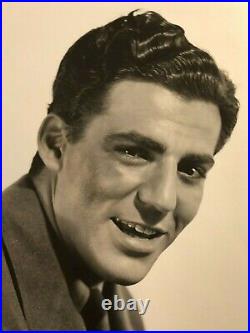 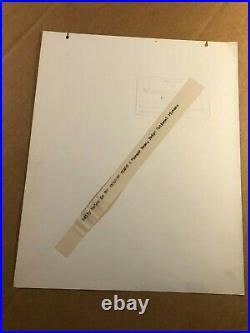 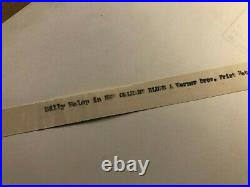 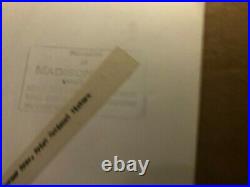 Here is a very rare early vintage original 8″ by 10″ photo of actor Billy Halop from 1941’s Blues In The Night, with original stamp on the reverse; made more rare for using the alternate title, New Orleans Blues. Photo by and stamped by classic Hollywood photographer Madison Lacy. Billy Halop’s show business career started on radio in the 1920s and carried over to stage work on Broadway. There, in 1937, he and other teenage cast members of the stage hit “Dead End” were brought to Hollywood by Samuel Goldwyn for the film version of the play, which was a tremendous hit. Halop and some of the other teenage cast members went on to do a series of films at Universal as the Dead End Kids/Little Tough Guys while some of the others worked at Monogram in a series as the East Side Kids. Halop left the group in the early 1940s to seek a career on his own, but could only land parts in B pictures. His career was also hampered by a long string of marital and financial problems and a lifelong struggle against alcoholism. Toward the end of his career, he had a recurring role as Munson, the owner of the cab company where Archie Bunker worked part time, in All in the Family (1971). His last years were spent making a living as a male nurse. Blues in the Night is a 1941 American musical in the film noir style directed by Anatole Litvak and starring Priscilla Lane, Richard Whorf, Betty Field, Lloyd Nolan, Elia Kazan, and Jack Carson. It was released by Warner Brothers. The project began filming with the working title Hot Nocturne, the play upon which it is based, but was eventually named after its principal musical number “Blues in the Night”, which became a popular hit. The film was nominated for a Best Song Oscar for “Blues in the Night” (Music by Harold Arlen; lyrics by Johnny Mercer). Blues in the Night was met with a mixed critical reception upon its release. Hollywood columnist Fred Othman named it “the worst musical of the year”. Donald Kirkley of The Baltimore Sun called it a bizarre… Screen oddity while Los Angeles Times film critic Philip K. Scheuer praised Richard Whorf’s performance. It was not financially successful as its East Coast release took place shortly before the attack on Pearl Harbor. The film has since achieved a small cult following, including The Simpsons creator Matt Groening. The film is recognized by American Film Institute in these lists. 2004: AFI’s 100 Years… “Blues in the Night” Nominated. The item “Billy Halop Rare Early Vintage Original Photo With Tag’41 Dead End Kids” is in sale since Tuesday, November 17, 2020. This item is in the category “Entertainment Memorabilia\Movie Memorabilia\Photographs\Pre-1940\Black & White”. The seller is “pengang” and is located in Marietta, Georgia. This item can be shipped worldwide.