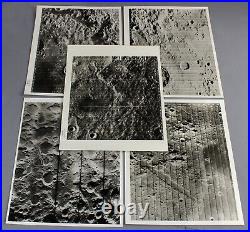 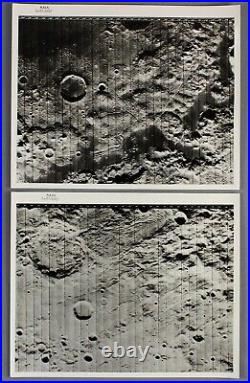 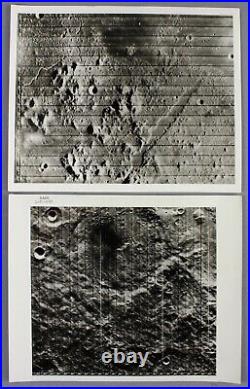 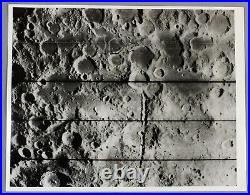 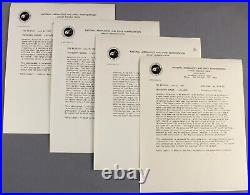 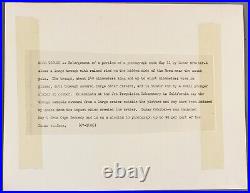 CLOSE-UP VIEWS OF THE MOON’S SURFACE. LUNAR ORBITER PROGRAM a series of five unmanned lunar orbiter missions launched by the United States from 1966 through to 1967. After the three previous orbiters had completed the required needs for Apollo mapping and site selection of the Moon, Lunar Orbiter IV – launched on May 4, 1967 – was given a more general objective, to perform a broad systematic photographic survey of lunar surface features in order to increase the scientific knowledge of their nature, origin, and processes… The robotic probe took a total of 419 high-resolution and 127 medium-resolution frames, covering 99% of the Moon’s near side at resolutions from 58 to 134 metres (190 to 440 ft), before it went into a decayed orbit and crashed onto the Moon’s surface sometime in October 1967. A superb collection of 5 original vintage NASA photographs of the surface of the Moon taken by Lunar Orbiter IV, June 1967. A total of 5 original vintage NASA. Gelatin silver prints on fibre-based paper. He lot includes three official NASA “Black Number” prints with printed NASA captions on the rear in black, another with black printed NASA caption on rear but without’Black Number’ on recto, and one further vintage NASA print with contemporary typed caption affixed to the rear. No photo paper watermarks. All from the same private collection. 26 x 20.25 cm (10 ¼ x 8 inches), with margins. Very Good overall condition. Print L-67-4828: shallow creasing to the top right corner. Some expected age toning and minor stains on the reverse along right edges. Tape marks to rear of photo with typed caption. Please ask if you require a more detailed condition report, and view gallery images closely. These 5 vintage and wholly original NASA photographs are all related to the Lunar Orbiter IV mission around the Moon to take photographs of its surface for scientific study. Images show different sections of the Moon’s craterous surface, and include three official NASA “Black Number” prints – L-67-4826, L-67-4828 and L-67-4828 – with NASA captions printed in black on the reverse; one without’Black Number’ (but with NASA caption printed in black on the reverse); and one (L-67-1806) with typed caption affixed to the reverse, which can be dated to the same period as the caption refers to the mission in the present tense. Provenance: from a private collection in England. This item is in the category “Collectables\Photographic Images\Photographs”. The seller is “kernoozers” and is located in this country: GB. This item can be shipped worldwide.