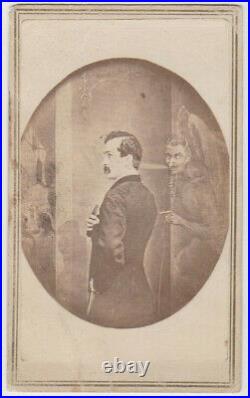 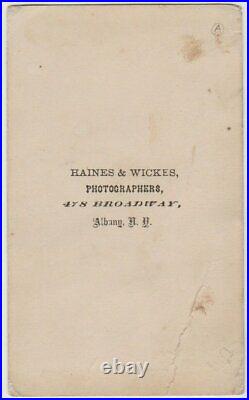 Original Civil War Political Memorabilia Collectibles Photos For Sale. John Wilkes Booth & the devil. Rare Original Vintage Photo, 1865. Amazing eerie but astonishing photo of John Wilkes Booth being coaxed by the devil into the most dastardly deed of the 19th century. As he begins to sneak behind President and First Lady Lincoln carry out the most evit act that would devastate the entire world. 1865 CDV photo depicting John Wilkes Booth, holding his Derringer pistol in one hand, and clutching his dagger with the other, standing at the door to the Ford’s theatre box where can be seen Abraham & Mary Lincoln, while the Devil himself whispers into Booth’s ear and prod’s his back with his sharp fingernail. The pose of Booth is an actual photo taken by C. Fredericks of NYC in 1863, which has been retouched by adding his weapons, the Devil, and the background with Lincoln, etc. Photographer’s imprint on the back: HAINES & WICKES, PHOTOGRAPHERS, 478 BROADWAY, Albany, N. A very scarce Carte de Visite created shortly after the assassination of Abraham Lincoln, reflecting the outrage felt at the foul deed. Rare original, 1865 albumen CDV depicting the “The Assassin”, John Wilkes Booth standing outside the door to the balcony at Ford’s Theater where President Abraham Lincoln and his wife can be seen. Booth holds a dagger in his left hand and a derringer in his right. A winged and horned Devil can be seen holding the door to the balcony open and prodding Booth to enter. The image of Booth was taken from the 1863 photograph by C. Fredricks when Booth was 25 years old. This item is in the category “Collectibles\Photographic Images\Photographs”. The seller is “cvtreasures” and is located in this country: US. This item can be shipped to United States, China, Japan, Brazil, Canada, United Kingdom, Denmark, Finland, Australia, France, Ireland, Netherlands, New Zealand, Bermuda.