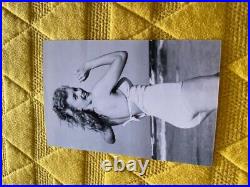 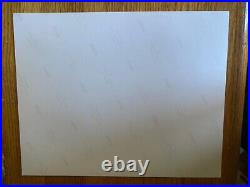 PLEASE READ THIS CAREFULLY! It was framed and matted. This is an 8″ x 10″ version of the photo, but although it is a rare photo of Marilyn–I own more than 900 different photos of Marilyn–I do not believe it is a first generation print from the original negative. BUT IS THE NICEST PRINT OF THIS I HAVE EVER SEEN! This is the only 8″ x 10″ print I own of this rare photo, which was taken in 1949 by the late Romanian-born photographer Andre De Dienes, one of the two men largely credited with “discovering” the woman who would in a matter of seven years become the most famous American actress of all time. Don’t argue with me! I didn’t say the greatest actress, just the most famous. Her acting was very underrated, however. It is hard to gain critical acclaim when you are playing a ditzy blonde, even when your IQ is more than 160! The important thing to know about this photo is not that it was taken during Marilyn’s pre-stardom years. There are several thousand different photos of Marilyn taken in the 1940s. No, what you need to know about this photo is that it is emblematic of many of the photos De Dienes took of Marilyn, with whom he was in love with and wanted to marry. “Emblematic” because this is just one of the photos De Dienes took of Marilyn that tried to obscure her chin! I cannot prove this, but over time Marilyn noticed how often De Dienes had her raise her hand to hide her chin or had her in high neck garments that accomplished the same purpose. The camera does not lie–at least to a photographer looking through a lens. The camera saw Marilyn’s rather weak, pointed chin. The camera-holder wanted to minimize what he saw was an aesthetic flaw, so he tried to cover it up–literally. And so, in 1951–that was 71 years ago–Marilyn called up a plastic surgeon in Los Angeles and said, figuratively, if not literally, fix my chin. Marilyn Monroe didn’t ask for a boob job, or a nose job. She wanted a chin implant! And she got one. I own several other De Dienes photos of Marilyn–some very expensive. This is not expensive, but it is one of my five favorite photos of Marilyn Monroe. I hope you enjoy it as much as I do. Now, the boring rules: 1 No discount. Not a penny more, not a penny less. 4 If you have a question, please ask. Thank you for reading this far. This item is in the category “Collectibles\Photographic Images\Photographs”. The seller is “beaniesandphotosandbooks” and is located in this country: US. This item can be shipped to United States, Canada, United Kingdom, Denmark, Romania, Slovakia, Bulgaria, Czech Republic, Finland, Hungary, Latvia, Lithuania, Malta, Estonia, Australia, Greece, Portugal, Cyprus, Slovenia, Japan, China, Sweden, Korea, South, Indonesia, Taiwan, South Africa, Thailand, Belgium, France, Hong Kong, Ireland, Netherlands, Poland, Spain, Italy, Germany, Austria, Bahamas, Israel, Mexico, New Zealand, Philippines, Singapore, Switzerland, Norway, Saudi Arabia, United Arab Emirates, Qatar, Kuwait, Bahrain, Croatia, Republic of, Malaysia, Brazil, Chile, Colombia, Costa Rica, Dominican Republic, Panama, Trinidad and Tobago, Guatemala, El Salvador, Honduras, Jamaica, Antigua and Barbuda, Aruba, Belize, Dominica, Grenada, Saint Kitts-Nevis, Saint Lucia, Montserrat, Turks and Caicos Islands, Barbados, Bangladesh, Bermuda, Brunei Darussalam, Bolivia, Ecuador, Egypt, French Guiana, Guernsey, Gibraltar, Guadeloupe, Iceland, Jersey, Jordan, Cambodia, Cayman Islands, Liechtenstein, Sri Lanka, Luxembourg, Monaco, Macau, Martinique, Maldives, Nicaragua, Oman, Peru, Pakistan, Paraguay, Reunion, Vietnam, Uruguay.