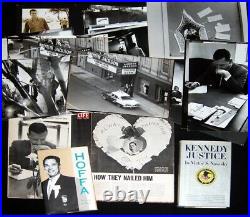 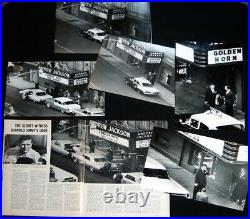 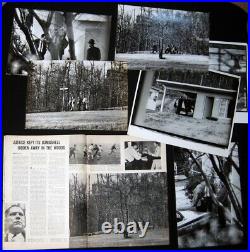 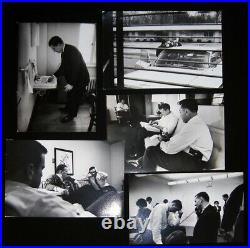 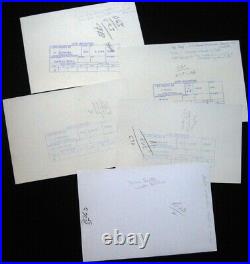 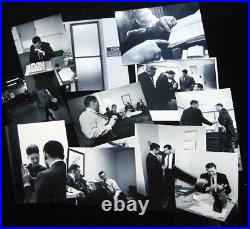 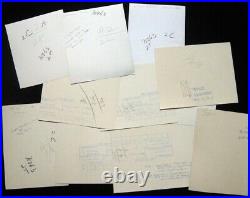 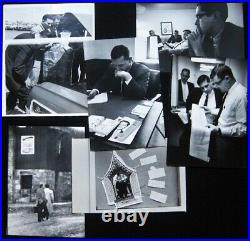 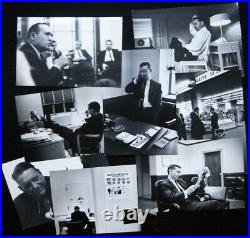 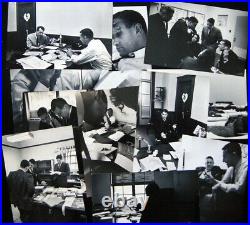 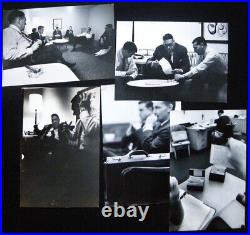 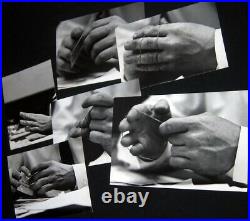 [027492] (Americana – 20th Century – Photojournalism – Jimmy Hoffa – Crime – International Brotherhood of Teamsters IBT). 1964 Collection of Photographs By Arthur B. Rickerby Photo-Documenting Bobby Kennedy’s Special Assistant Walter J. Sheridan and His Team’s Successful Federal Conviction of Labor Leader Jimmy Hoffa. Jury-Tampering, Fraud and Conspiracy in Nashville Tennessee. Jimmy Hoffa had had some minor brushes with the law during his life as a labor activist and had never been convicted of a felony, despite Attorney General Bobby Kennedy’s repeated attempts. Subsequently, the Nashville-Chattanooga-Chicago series of trials were the turning point in Hoffa’s heretofore legally’unblemished’ career. Hoffa was charged with having unlawfully, willfully and knowingly attempted, with six coconspirators, to influence members of a Nashville jury during a trial held for an alleged violation of the Taft-Hartley Act. At the jury-tampering trial, convened in Chattanooga, Walter J. Sheridan’s “Get Hoffa Squad” established by Bobby Kennedy presented evidence of jury tampering.. On March 4, 1964, after deliberating for five hours and forty minutes, the Chattanooga jury found James R. Hoffa guilty on two counts of trying to fix the jury in his 1962 Nashville conspiracy trial.. The judge sentenced Hoffa to eight years in prison. See Arthur A. Cambridge MIT Press 1991 for a thorough treatment of this series of trials, which catalyzed into the. Destruction of Hoffa’s career. This group of photographs by photo-journalist Arthur B. Rickerby (1921 – 1972) captures the lead-up to the Chattanooga trial, including surveillance-type imagery of the various actors in the case. 86 photographs, all in black and white & including (4) doubles. These images were taken in Nashville and Chattanooga Tennessee and there are also (1) identified as the Detroit FBI office and another of the Newark offices. (1) 10″ x 15″. (1) 4″ x 6″. A few of the photographs are cropped from a larger size, as for publication. Many have the full LIFE Magazine stamp on back, dating & identifying the images for the March 1964’Justice Story’ in that publication. Others have the smaller LIFE stamp or Rickerby’s personal stamp. Many also identify the participants on the back and are noted as by Rickerby, with his by-line and occasionally identifying notes. Shown are Walter Sheridan & his staff of the “Get Hoffa Squad”; Edward G. Partin, the surprise star witness for the prosecution, members of his family and his friend Emmett Tucker. Also identified are various attorneys, FBI agents and the Federal Marshals who were guarding Partin. The pictures show these people while under surveillance, for meetings, working in their offices, in various motel rooms and at other locations. The references which we provide, especially the LIFE magazine article, allow for more identification to many of these images. Also included in the image count are (15) photographs of Walter Sheridan and his family and friends and (7) dramatic close-up photographs of his hands, the photographer visually capturing his tension in this case. The drama of the moment is visible in the faces of the people and in their actions: Sheridan playing chess, awaiting developments; team member Grimsby burning notes in the sink in the Chattanooga courthouse; convicted co-defendant Benjamin Dranow’s’wanted’ poster on the squad’s wall; an office door with no name-plate, emphasizing the secrecy of the operations; Hoffa and’crew’ leaving the Andrew Jackson hotel and more.. With a decent defense, with his defense well prepared, with his trial staff led by the respected and talented Tommy Osborn and fortified by Bill Bufalino, Frank Ragano, and yet more legal talent in court and on call, and with a fair judge, why did Jimmy Hoffa resort to cheating? Why did he turn a misdemeanor into a felony? Other than assaults and that kind of thing, Jimmy didn’t have any convictions on his record for doing anything really wrong, and he didn’t even want a misdemeanor. He wanted a clean record. He didn’t want Bobby Kennedy causing him to have a record that involved a real crime. ” (Frank Sheeran, quoted by author Charles Brandt in “I Heard You Paint Houses/The Irishman 2004). Jimmy Hoffa, (1913 – 1975) American trade union leader, was… Convicted in federal court of jury tampering, fraud, and conspiracy in the disposition of union funds, a personal triumph for Robert Kennedy and a posthumous victory for the Kennedy administration. After exhausting appeals, Hoffa left the Teamsters to his handpicked successor, Frank Fitzsimmons, and began in 1967 to serve a thirteen-year prison sentence in the federal penitentiary at Lewisburg, Pennsylvania. His success both in building the Teamsters and in reviving labor’s commitment to organize the unorganized in the 1960s, along with a notoriety born of his underworld connections’ strong-arm methods and the mystery of his disappearance, made him the best-known and most controversial U. Labor leader of the second half of the twentieth century. (Norman Markowitz in the ANB). Included with this collection are the books’Hoffa’ by Arthur A. Sloane and’Kennedy Justice’ by Victor S. Navasky; also the 1964 LIFE magazine with the article on the trial, its lead-up and conclusion. These references provide full background on the case and biographical detail on people portrayed in the photographs. Photographs with some tips and edge-wear, a little crinkling; the large cardstock-mounted photo of Partin with a crack in the surface; one of the’surveillance’ style images with short closed edge-tear. All in very good condition. This item is in the category “Collectibles\Photographic Images\Photographs”. The seller is “475today” and is located in this country: US. This item can be shipped worldwide.