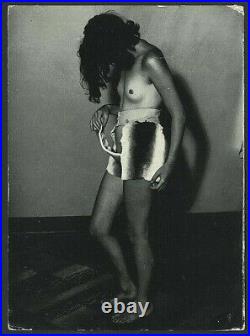 Vintage, Original Printed (offset) Photograph. French Late1920s DIANA SLIP Lingerie PRINTED Offset Photo FUR PANTIES + Stockings Roger Schall Please! Do NOT pirate or repost my scans! Printed (offset/halftones) photograph attributed to Jean Moral or (more likely) Roger Schall for the fetish, fantasy lingerie fashion company, Diana Slip; advertising, promotional card; front view of her slim figure in what appear to be fur panties, no stockings. Scan says it best. The Diana Slip Company was one of the sidelines of publisher, Leon Vidal creator of risque Parisian magazines of the 1920s and’30s. Vidal had quite a reach into the “demi-monde” of risque, nude and erotic material created in Paris and at one time operated numerous boutiques catering to his special clientele. At the end of the 1920s Vidal started the Diana Slip Company, creating non-traditional, fetish and fantasy lingerie for the boudoir and the inspired exhibitionist. The designs were creative and daring and in order to properly capture their impact, Vidal hired very talented Parisian photographers. The first two, Jean Moral and Roger Schall were joined for the 1931/1932 (and possibly later) promotional campaigns, by Brassai. 5 x 7 printed (offset) photograph in good condition: corners and edges slightly worn and chipped. Upper right corner which is rubbed + a few scattered tiny white spots/white lines due to wear/slightest rubbing to the glossy surface. Scans are true wysiwyg! This item is in the category “Collectibles\Photographic Images\Photographs”. The seller is “roseros” and is located in this country: US. This item can be shipped to United States.