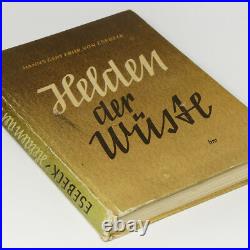 Heroes of the Desert. Scarce book about Rommels Deutsche Afrikakorps (DAK) Rommel was Field Marshal (Generalfeldmarschall) in WWII. There are lots of photos of German tanks of course, as well as the famous Field Marshal, British Prisoners of War, the Germans Italian Allies, German Graves, Life in the Field, Motorcycles with and without Sidecars, Panzer, German Aircraft, Roman Ruins in the Desert and more.. Color frontispiece of Rommel. With 40 b/w photos. 35 full page Agfacolor photos. Color map of North Africa in rear. Good exterior and near fine interior. Boards and spine lightly edgeworn, spine slanted, else ok! Pages are very clean. All pages are complete and tight in the binding. Approx/Measurements: 8-3/4″ x 6″ 1.0 lbs. Von E se_beck Publisher: Company of Home Library. Rommel spent most of 1941 building his organization and re-forming the shattered Italian units, who had suffered a string of defeats at the hands of the British under Major General Richard O’Connor. An offensive pushed the British forces back out of Libya, but it stalled a relatively short way into Egypt, and the important port of Tobruk was still held by Allied forces behind the Axis lines. The British Commander-in-Chief General Archibald Wavell swapped commands with the Commander-in-Chief of India, General Claude Auchinleck. Auchinleck launched a major offensive to relieve Tobruk which eventually succeeded. However, when this offensive ran out of steam, Rommel struck. In a classic blitzkrieg, British forces were comprehensively outfought. Within weeks they had been pushed back into Egypt. Rommel’s offensive was eventually stopped at the small railway halt of El Alamein, just 60 miles from Cairo. The First Battle of El Alamein was lost by Rommel because he was suffering from the eternal curse of the desert war, long supply lines. The British, with their backs against the wall, were very close to their supplies, and had fresh troops on hand. Rommel tried again to break through the British lines during the Battle of Alam Haifa. He was decisively stopped by the newly arrived British commander, Lieutenant General Bernard Montgomery. With British forces from Malta interdicting his supplies at sea, and the massive distances they had to cover in the desert, Rommel could not hold the El Alamein position forever. Still, it took a large set piece battle, the Second Battle of El Alamein to force his troops back. After the defeat at El Alamein, despite urgings from Hitler and Mussolini, Rommel’s forces did not again stand and fight until they had entered Tunisia. Even then, their first battle was not against the British Eighth Army, but against the US II Corps. Rommel inflicted a sharp reversal on the American forces at the Battle of the Kasserine Pass. Turning once again to face the British forces in the old French border defences of the Mareth Line, Rommel could only delay the inevitable. He left Africa after falling sick, and the men of his former command eventually became prisoners of war. Some say that Rommel’s withdrawal of his army back to Tunisia against Hitler’s dreams was a much greater success than his capture of Tobruk (in sharp contrast to the fate suffered by the German 6th Army at the Battle of Stalingrad under the command of Friedrich Paulus). Erwin Rommel was holder of the Knight’s Cross of the Iron Cross with Oakleaves, Swords and Diamonds. The item “Rommel Afrikakorps DAK WW2 Book Heroes of Desert with b&w + Agfa Color Photos Ital” is in sale since Friday, July 10, 2020. This item is in the category “Collectibles\Militaria\WW II (1939-45)\Original Period Items\Germany\Books”. The seller is “ob8t” and is located in Bavaria. This item can be shipped to North, South, or Latin America, all countries in continental Asia, United Kingdom, Australia.