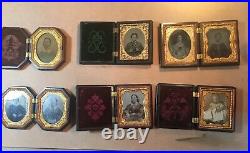 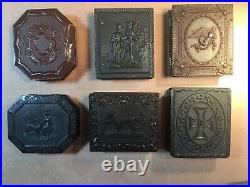 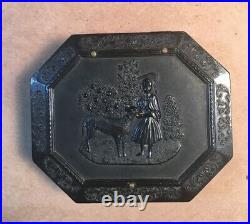 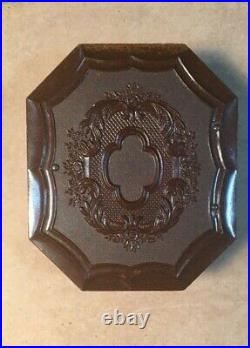 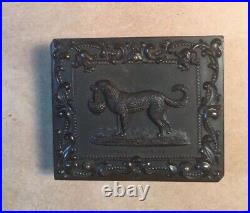 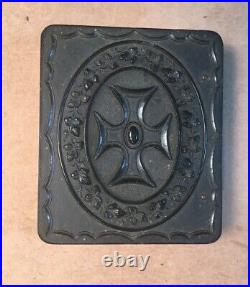 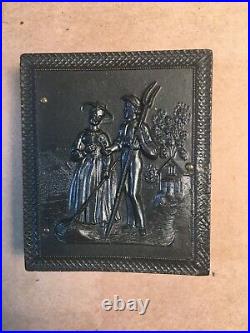 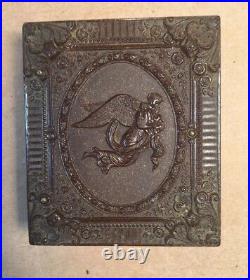 Nice Collection of Six Ninth Plate Union Cases. With Ambrotypes Tintypes & Daguerreotypes. As a group these are in far better condition than what is usually found. The first is Berg 3-390 which is listed as scarce in the book. It is a two hinge octagonal case that is very close to mint condition with no flea bites, chips or other problems. It clicks close tightly and has a nice ambrotype of a young woman. The next one is also octagonal, Berg 1-157. Berg lists this as common but it is seen with far less frequency than most of the more common pieces. It is titled Mary Had A Little Lamb. The photos are ordinary, it has two women, an ambrotype and a tintype, both of which have some flaws. The third is Berg 1-150 which is listed as scarce in the book. Its a very popular design called American Gothic. It is clearly the source of Grant Woods famous painting by the same name. This case predates the artwork by over 70 years. The case has had some well executed repairs and faces up very nicely. The photo is a razor sharp tintype of a confident young man. Next, is Berg 1-164 which is listed as rare in the Berg Book. The case is titled Going To Market which, unusually, appears on the case immediately below the dog. It contains a beautiful ambrotype of a nicely dressed young woman. The appearance is lovely from the face, although the back, which has the same design, has been partially split and glued. Next item is Berg 1-142 which is considered scarce in the book. It depicts an angel carrying two toddlers and is titled Night With Children. The back has some discoloration but the face is close to perfection. It contains two ambrotypes, apparently a mother and child, both of medium tonal quality. The last case is Berg 3-258 which is listed as common. It is a very nice example of a geometric case and has not a problem worthy of mention. The case contains a gorgeous daguerreotype of a baby. Please be sure to check my other vintage items and photographs. Ambrotypes Tintypes & Daguerreotypes. The item “Lot of 6 Ninth Plate Union Cases with Ambrotypes Tintypes & Daguerreotypes” is in sale since Monday, October 19, 2020. This item is in the category “Collectibles\Photographic Images\Photographs”. The seller is “briguynyc” and is located in Forest Hills, New York. This item can be shipped to United States, Canada, United Kingdom, China, Mexico, Germany, Japan, Brazil, France, Australia, Denmark, Romania, Slovakia, Bulgaria, Czech republic, Finland, Hungary, Latvia, Lithuania, Malta, Estonia, Greece, Portugal, Cyprus, Slovenia, Sweden, South Korea, Indonesia, Taiwan, South africa, Thailand, Belgium, Hong Kong, Ireland, Netherlands, Poland, Spain, Italy, Austria, Bahamas, Israel, New Zealand, Philippines, Singapore, Switzerland, Norway, Saudi arabia, United arab emirates, Qatar, Kuwait, Bahrain, Croatia, Malaysia, Chile, Colombia, Costa rica, Panama, Trinidad and tobago, Guatemala, Honduras, Jamaica, Antigua and barbuda, Aruba, Belize, Dominica, Grenada, Saint kitts and nevis, Saint lucia, Montserrat, Turks and caicos islands, Barbados, Bangladesh, Bermuda, Brunei darussalam, Bolivia, Ecuador, Egypt, French guiana, Guernsey, Gibraltar, Guadeloupe, Iceland, Jersey, Jordan, Cambodia, Cayman islands, Liechtenstein, Sri lanka, Luxembourg, Monaco, Macao, Martinique, Maldives, Nicaragua, Oman, Peru, Pakistan, Paraguay, Reunion, Viet nam, Uruguay.