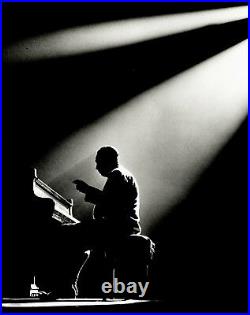 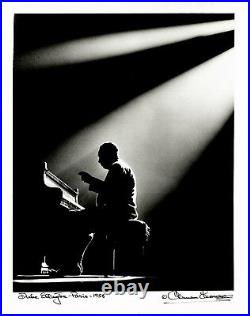 Duke Ellington, Paris , 1958. Gelatin silver print, printed 2004. Signed, titled & dated in ink in the margin. 14 x 11 inches. Illustrated: The Eye of Jazz: The Jazz Photographs of Herman Leonard , Viking, 1989, p. Provenance: The Artist to the present owner. LOeil de Jazz: Herman Leonard (French Edition), 1985. The Eye of Jazz: Herman Leonard , 1990. Jazz Memories : Herman Leonard, 1995. Jazz, Giants & Journeys: The Photographs of Herman Leonard, 2006. Jazz: Herman Leonard , 2010. The Smithsonian Institution has the entire set of photographs from Leonard’s Images of Jazz portfolio in its permanent collection. Herman Leonard (March 6, 1923, in Allentown, PA, August 14, 2010, in Los Angeles, CA) was an American photographer known for his unique images of jazz icons. After graduation (from Ohio University), he apprenticed with portraitist Yousuf Karsh for one year. Karsh gave him valuable experience photographing celebrities and public personalities such as Albert Einstein, Harry Truman and Martha Graham. In 1948, Leonard opened his first studio in Greenwich Village. Working free-lance for various magazines, he spent his evenings at the Royal Roost and then Birdland, where he photographed Dexter Gordon, Charlie Parker, Dizzy Gillespie, Billie Holiday, Duke Ellington, Miles Davis and others. Using glass negatives at the time, Leonard increased the sensitivity of the plates by exposing them to mercury vapor. After working for jazz record producer Norman Granz, who used his work on album jackets, Leonard was employed in 1956 by Marlon Brando his personal photographer. Leonard moved to Paris, photographing assignments in the fashion and advertising business and as European correspondent for Playboy Magazine. His last flurry of photographing jazz musicians dates from this period. In August 2005, Hurricane Katrina destroyed Leonard’s home and studio when the 17th Canal Levee broke near his home. The photographer and his family lost much property, including 8,000 prints, but his negatives were protected in the vault of the Ogden Museum in New Orleans. Following Hurricane Katrina, Leonard moved to California and re-established his business there, working with music and film companies and magazines. Leonard’s jazz photographs, now collector’s items, are a unique record of the jazz scene of the 1940s, 1950s and 1960s, and his collection is now in the permanent archives of American Musical History in the Smithsonian Museum, Washington DC. In 2008, long-time friend Tony Bennett presented Leonard with the coveted Lucie Award at a ceremony at Lincoln Center in New York City. In June 2009, Leonard was the commencement speaker for the 2009 graduating class of Ohio University, at which time he also received an honorary doctorate. The item “Herman LEONARD Duke Ellington, Paris, 1958 / Silver Print / Ptd 2004 / SIGNED” is in sale since Sunday, June 16, 2019. This item is in the category “Art\Art Photographs”. The seller is “katrinadoernerphotographs” and is located in Brooklyn, New York. This item can be shipped worldwide.