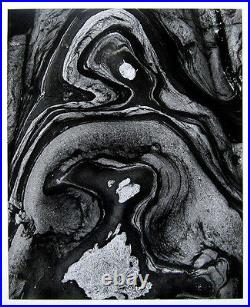 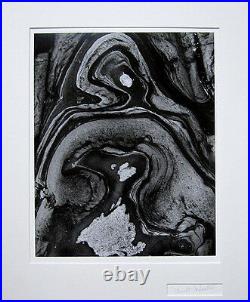 BRETT WESTON Signed 1970’s Original Photograph – “Abstract Image”. This rare original photograph, Abstract Image , is signed in pencil by the photographer on the front lower right of the mount “Brett Weston”. It is in excellent condition, measures 10 ¾” x 13 ¼” and is dry mounted and matted for a total size of 15″ x 18″. Brett Weston seemed destined from birth to become one of the greatest American photographers. Born in 1911 in Los Angeles, California, Weston was the second son of famous photographer Edward Weston. At the age of 14, his father removed him from school where they then relocated to Edward Weston’s photographic studio in Mexico. It was in Mexico where Weston began making photographs with a Graflex 3 ¼ x 4 ¼ Camera. He became his father’s apprentice and was introduced to painters like Diego Rivera and Jose Clemente Orozco, and photographers such as Tina Modotti. These artists introduced the young Weston to modern art forms, which unquestionably influenced his early sense of form and composition. Under the astonished eye of his father, Weston began his legendary technical precision, bold design and extreme abstractions of form. His father once observed that Weston was doing better work at the age 14 then he had done at the age of 30 years old. According to the curator of the San Francisco Museum of Modern Art, Van Deren Coke, Brett Weston was the child genius of American photography. His first prints were put on exhibit at UCLA in 1927. His first solo exhibition was held the same year at the Jake Zeitlin’s bookstore and gallery in Los Angeles. At the age of eighteen, Weston received critical attention after his work was displayed in the Film and Foto exhibition in Stuttgart, Germany among renowned photographers; Man Ray, Berenice Abbot, Paul Outerbridge, and his own father Edward Weston. Weston worked as a sculptor and photographer for the Works Progress Administration in 1936 and worked as a cameraman for 20th Century Fox war films before being drafted in 1941. Two years earlier his portfolio of San Francisco images was published. While in the army Weston served under the command of ex-Farm Security Administration photographer Arthur Rothstein on Long Island. When on the off-duty, Weston began photographing the diverse forms and textures of the New York metropolis with large format 8’x10″ and 11×14″ view cameras. Later a portfolio of these images was published in 1951. In 1946 after being discharged from the Army, Weston was awarded a Guggenheim Fellowship. At this time he chose to continue photographing the East Coast; however after completing this venture Weston moved to Carmel, California in order to pursue only fine art work. Weston was prolific in his photographs, but remained devoted to the quiet, solitary pursuit of his work and was very selective about what he exhibited during his life. In 1952, Weston again assisted his father, who was suffering from Parkinson’s disease, to print the Edward Weston 50th Anniversary Portfolio. Weston’s first book publication, Brett Weston Photographs, appeared in 1956. Throughout the decades of the 1950s and 1970s, Brett Weston’s style changed sharply and was characterized by high contrast, abstract imagery. The subjects he chose were, for the most part, not unlike what interested him early in his career; plant leaves, knotted roots and tangled kelp along the beach. He concentrated mostly on close-ups and abstracted details, but his prints reflected a preference for high contrast that reduced his subjects to pure form. He died at his Hawaiian home, in Kona, in January, 1993. Works by Brett Weston are included in collections of the Colorado Springs Fine Arts Center, the Honolulu Museum of Art, the Los Angeles County Museum of Art, the Museum of Contemporary Art, Los Angeles, the Oklahoma City Museum of Art and the San Francisco Museum of Modern Art, among others. The item “BRETT WESTON Signed 1970’s Original Photograph Abstract Image” is in sale since Thursday, February 7, 2013. This item is in the category “Art\Art Photographs”. The seller is “skf-fineart” and is located in Los Angeles, California. This item can be shipped worldwide.