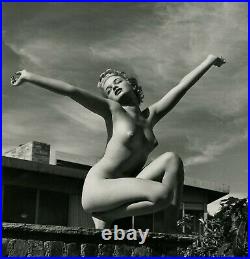 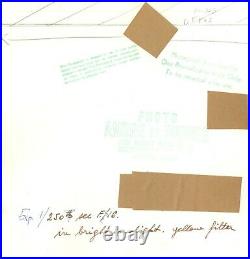 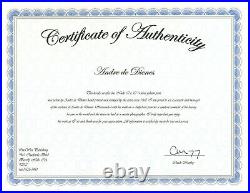 Rare Andre De Dienes 10 x 10 1/2 vintage photograph of a nude, circa 1960. 10 x 10 1/2 inches vintage photograph. Also technical notations on back of the print. Some old masking tape on back not effecting the image. Comes with the Certificate of Authenticity. December 18, 1913 April 11, 1985 was a Hungarian photographer, noted for his work with. Dienes was born in Torja, Kingdom of Hungary (present-day Turia, Romania), on December 18, 1913, and left home at 15 after the suicide of his mother. Dienes travelled across Europe mostly on foot, until his arrival in Tunisia. Returning to Europe he arrived in Paris in 1933 to study art, and bought a Rolleiflex shortly after. Dienes began work as a professional photographer for the Communist newspaper L’Humanité, and was employed by the Associated Press until 1936, when the Parisian couturier Captain Molyneux noted his work and urged him to become a fashion photographer. In 1938 the editor of Esquire, Arnold Gingrich offered him work in New York City, and helped fund Dienes’ passage to the United States. Once in the United States Dienes worked for Vogue and Life magazines as well as Esquire. When not working as a fashion photographer Dienes travelled the USA photographing Native American culture, including the Apache, Hopi, and Navajo reservations and their inhabitants. Dissatisfied with his life as a fashion photographer in New York, Dienes moved to California in 1944, where he began to specialize in nudes and landscapes. As well as Monroe, Dienes also photographed such notable actors as Elizabeth Taylor, Marlon Brando, Henry Fonda, Shirley Temple, Ingrid Bergman, Ronald Reagan, Jane Russell, Anita Ekberg and Fred Astaire. De Dienes married twice, and died of cancer on April 11, 1985, in Hollywood. N 1945 Dienes met the nineteen-year-old. Then called Norma Jeane Baker, who was a model on the books of Emmeline Snivelys Blue Book Model Agency. Snively told Dienes of Norma Jeane, and suggested her for his project of photographing artistic nudes. Norma Jeane seemed to be like an angel. I could hardly believe it for a few moments. An earthly, sexy-looking angel! Sent expressly for me! His series of pin-up shots of her at Long Island. In Oyster Bay, New York. Norma Jeane had recently separated from her husband, James Dougherty and told Dienes of her wish to become an actress. Dienes had earlier been present at the first meeting of Monroe and her mother in six years, and had presumptuously announced to her mother that he and Monroe were to be married. Dienes next met her on. In 1946, with her new name of Marilyn Monroe, they next worked together in 1952, where he shot her at the. And 1953, where she telephoned him at 2am, and took him to a darkened street where he used his car headlights to illuminate her, taking pictures her wide-eyed and unmade up. Dienes last saw her alive in June 1961. Of their last meeting he said that… Her success was a sham, her hopes thwarted… The next day she left a bouquet outside my door: a selection of her latest photos. Smiling, radiant – utterly misleading; I little guessed that this was our last goodbye. In recent years, Dienes’ photography has received overdue critical attention from a variety of sources. Published an 848-page two-volume monograph titled Marilyn, noting “his original, inspired style” and how Dienes soon built up a huge portfolio of stunning photographs of the smiling brunette which helped to launch her model career and, a few years later, a film career that was to make her a legend. An exhibition, entitled “André de Dienes: Marilyn and California Girls, ” opened June 9, 2016 at the Steven Kasher Gallery in New York City, representing the first solo show of Dienes’ photography in New York in over ten years. The item “RARE ANDRE DE DIENES VINTAGE 1950’s NUDE 10 x 10 1/2 PHOTOGRAPH” is in sale since Wednesday, October 13, 2021. This item is in the category “Art\Art Photographs”. The seller is “the-nylon-jungle” and is located in Forest Hills, New York. This item can be shipped to North, South, or Latin America, all countries in Europe, China, Japan, Australia.