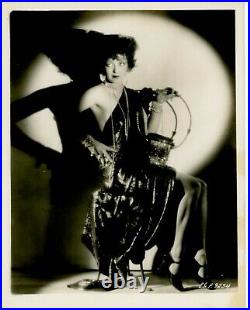 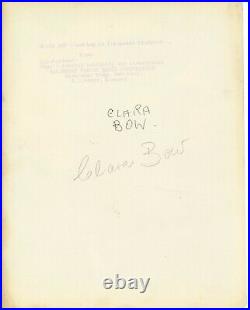 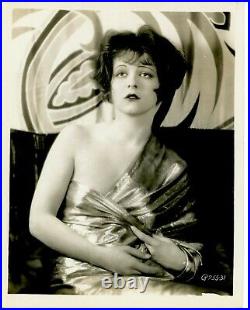 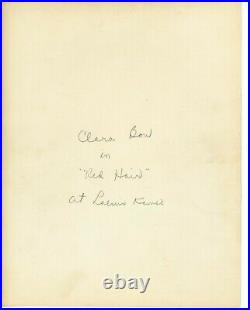 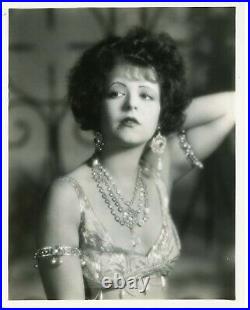 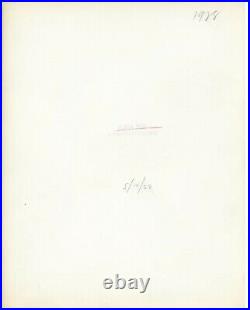 “RED HAIR”1928 , PARAMOUNT. STAMPED PARAMOUNT PUBLICITY 5-14-28. Red Hair is a 1928 silent film starring Clara Bow and Lane Chandler, directed by Clarence G. Badger, based on a novel by Elinor Glyn, and released by Paramount Pictures. The film had one sequence filmed in Technicolor, and is now considered a lost film except for the color sequence at the UCLA Film and Television Archive, and a few production stills. Clara Gordon Bow (July 29, 1905 September 27, 1965) was an American actress who rose to stardom in silent film during the 1920s and successfully made the transition to “talkies” in 1929. Her appearance as a plucky shopgirl in the film It brought her global fame and the nickname “The It Girl”. Bow came to personify the Roaring Twenties and is described as its leading sex symbol. Bow appeared in 46 silent films and 11 talkies, including hits such as Mantrap (1926), It (1927), and Wings (1927). She was named first box-office draw in 1928 and 1929 and second box-office draw in 1927 and 1930. Her presence in a motion picture was said to have ensured investors, by odds of almost two-to-one, a “safe return”. At the apex of her stardom, she received more than 45,000 fan letters in a single month (January 1929). Two years after marrying actor Rex Bell in 1931, Bow retired from acting and became a rancher in Nevada. Her final film, Hoop-La , was released in 1933. In September 1965, Bow died of a heart attack at the age of 60. ALL PHOTOS MAY NOT APPEAR IN THE LISTING. = NOTES ON BACK. 8″x 10″ UNLESS NOTED. MIXED LOT= SEE BELOW. DO NOT INCLUDE A PHOTO. NEGATIVES : COLOR or B&W. VG+ to AS NEW. VARIOUS SIZES PHOTO’S. ALL PHOTO’S: VG- to F+. ARE IN THEIR ORIGINAL ENVELOPES. PORTRAITS ARE ALL VINTAGE ORIGINALS. MOST SEEM TO BE FROM COSTUME FITTING’S, STUDIO PUBLICITY DEPARTMENT’S, ETC. ALL ARE OF ACTOR’S, ACTRESS’S: VARIOUS STUDIO. IN CHARACTER PHOTO’S, COSTUME FITTINGS FOR THEIR FILMS AT THE TIME OF PRODUCTION. WERE PHOTOGRAPHED FLAT ON A LIGHT BOX. I DID DIFFERENT BRIGHTNESS SETTING TO GIVE A BETTER VIEW OF THEM. MY CAMERA COULD NOT CAPTURE THEM PERFECTLY OCCASIONAL LIGHT FLARES, SHARPNESS, COLOR DEPTH. DID THE BEST I COULD. THEY ARE ALL SHARP, COLOR’S BRIGHT AS ALL WERE ORIGINAL TAKEN BY PROFESSIONAL STUDIOS PHOTOGRAPHERS. PLEASE READ BELOW CAREFULLY. MIXED LOTS: PHOTO’S ARE FROM THE ORIGINAL PICTURE RELEASE DATES, OR THE ORIGINAL RE-RELEASE DATES WHICH WOULD BE A LATER DATE. THUS STILL AN ORIGINAL STUDIO RELEASE. ALL LISTINGS WILL HAVE RELEASE DATES NOTED. SOME HAVE NO IDENTIFYING LISTING EITHER ON FRONT OR BACK OF PHOTO’S. ARE STUDIO PRODUCTIONS, PRESS KIT SHOTS, PUBLICITY DEPARTMENTS, HEAD-SHOT’S, ETC. FROM THE ORIGINAL STUDIOS. ALL PHOTO’S, TRANSPARENCIES & NEGATIVES ARE ORIGINAL FROM THEIR RESPECTIVE STUDIO’S, I ONLY CAN GIVE A DATE OR AN APPROXIMATION AS TO WHEN THE ORIGINAL WAS MADE. THUS THEY ARE ALL ORIGINAL TO THAT STUDIO, BUT THEY MAY BE A LATER GENERATION MADE FROM THE ORIGINAL NEGATIVES AT AND BY THAT STUDIO. I TRY TO PUT AS MUCH INFORMATION THAT IS AVAILABLE IN THE LISTING. All items are original, unless stated otherwise. I stand behind all my merchandise as being as stated. I try to be as accurate and precise as possible when describing items but this is not an exact science, we are all human. I usually will under grade slightly. Here is my system: 1. Means exactly that, no flaws. NEW/NEAR MINT: means there may be very some tiny flaw such as some very minor rubbing. FINE: means there may be slightly more imperfections, such as some wear or a tiny crease, etc. VERY GOOD: means there are flaws, such as pinholes, small closed tears, spots, rubbing, creases, chips, staining, discoloration, etc. All of which would be minor. GOOD: means that there are significant problems. Holes, tears, pieces missing, smoke damage, mold, insects, dents, cracks, parts missing, incomplete items, water staining or damage, sunning, loose pages, bindings, covers. All of which would lean more toward the extreme side. Most items look better than the photo allows for. Powered by SixBit’s eCommerce Solution. The item “VINTAGE PHOTOS-3-CLARA BOW-RED HAIR1928, STAMPED PARAMOUNT 5-14-28″ is in sale since Tuesday, January 26, 2021. This item is in the category “Entertainment Memorabilia\Movie Memorabilia\Photographs\Pre-1940\Black & White”. The seller is “booksrfun” and is located in Palm Desert, California. This item can be shipped to United States, all countries in Europe, Japan, Canada, Australia.