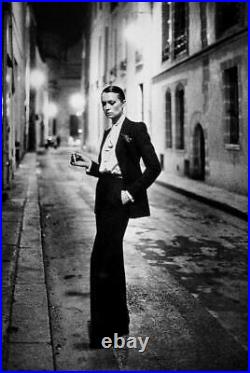 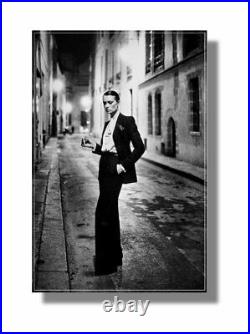 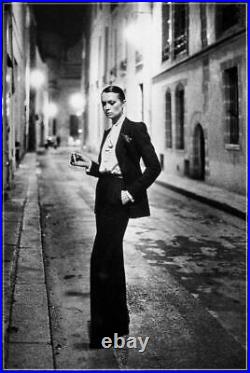 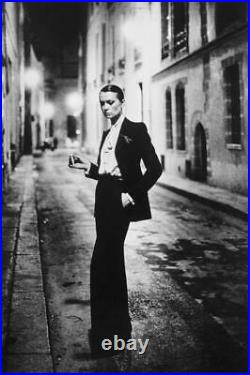 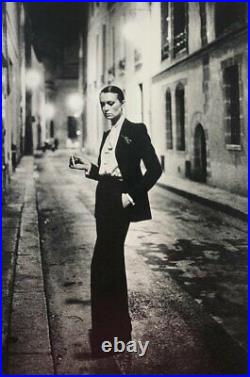 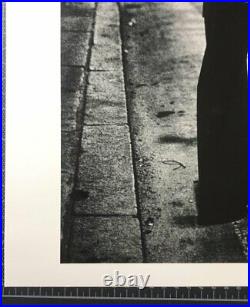 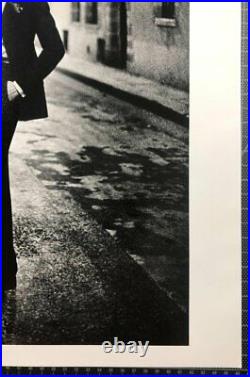 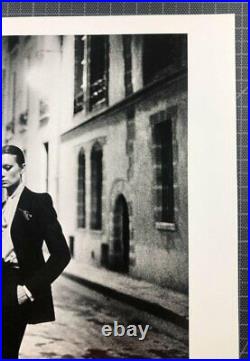 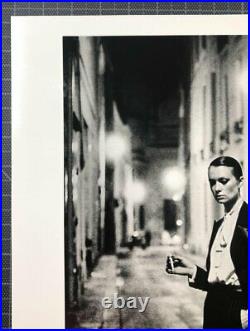 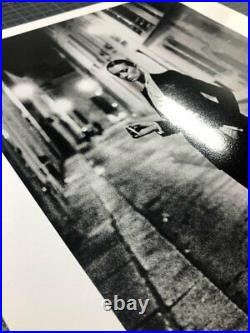 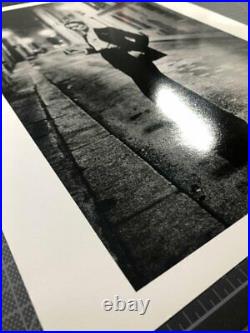 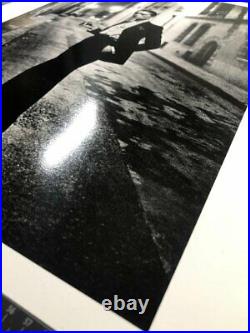 POA (photos of actual artwork). 16″x20″ vintage silver gelatin print. Helmut Newton’s Private Property Collection “Rue Aubriot” original fine art shot in 1975, featuring actress, Vibeke Knudsen standing alone in a lamp lit Parisian street. Styled in a deliberately androgynous outfit made up of Yves Saint Laurent’s cult Le Smoking dinner jacket, pin-striped wide leg formal trousers and white tie, the photograph was to immortalize the Yves Saint Laurent aesthetic that took over the 70s. Newton loved to shot outdoors and this night-time scene, using only the street lighting available, was directly drawn from the nocturnal photographs of his hero, Brassai. Recalling the shoot in an interview with New York Magazine in 1988 Newton said:’Vibeke was a girl I often worked with in those days. The idea was a man-woman standing in the street at night – the street, in fact, in Paris’ Marais district, where I lived for 14 years. Newtons own house can be seen in the background. This is a rare pre-1985 original vintage print produced in small numbers from a series of transparencies that Newton considered his most provocative and important work through 1985. Always unsigned, they were sent out to major publications to stimulate interest in a photographers work. Most were destroyed or written over, it is very rare to find them in immaculate condition. This collection of vintage prints were gifted to Newtons agent Norman Solomon, in recognition of the work he had carried out in promoting Newtons Private Property series of exhibitions in 1985. This fine art print comes with a Certificate of Authenticity signed by Norman Solomon. The ownership rights of this vintage print are supported by an original agreement with Newton in 1984, and supplemented by a further agreement with The Helmut Newton Estate in 2012. This print has been stored in conservation condition. Ns Private Property exhibitions were produced by agreement in Paris, London and New York City in 1985. The item “Rue Aubriot, Parisian Street 1975 16×20 Vintage Silver Gelatin by Helmut Newto” is in sale since Saturday, May 30, 2020. This item is in the category “Art\Art Photographs”. The seller is “globalimagesgallery” and is located in Los Angeles, California. This item can be shipped worldwide.