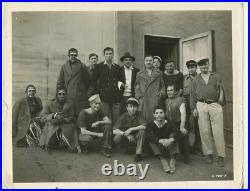 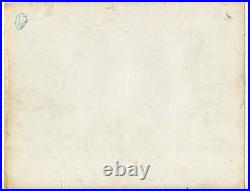 DETAILS: Original vintage photograph of the cast of the film King Kong, RKO Pictures. The man in the middle wearing the fedora hat is Merian C. Cooper, the producer of King Kong. To his right is Coopers alter ego in the film, Robert Armstrong as movie producer Carl Denham. Like Cooper the fictional Denham traveled with his camera crew to far-off places to film scenes rarely encountered by most people at the time. Also identified in the photo is Bruce Cabot who is standing to the left of Cooper. 8″ x 10″ inches. GUARANTEE: We offer a lifetime guarantee on all of our photographs to be authentic originals. They are not reproductions or recent prints. We forensically examine all of our items prior to listing to make certain they are authentic and guarantee their authenticity for the lifetime of the item. Kilgore was a noted comic book artist, animator, writer and film maker. He worked for Dell Publishing starting in the late 1940’s and was responsible for the publishers magazine art department. While at Dell he acquired a large number of original photographs of celebrities and Hollywood films. Starting in the early 1960’s he was a regular contributor to Dell’s Four Color comic book series. From 1962-67 he was the artist on the Bullwinkle comic strip series. In addition to his comic illustration work, Kilgore also contributed art and stories to monster and science fiction magazines from the 1960’s onward. In 1976 he won the National Cartoonist Society award for excellence. Oxxbridge Galleries was founded in 1987 and specializes in vintage paper items. We are among the largest sellers of vintage Hollywood photos in the world with a particular emphasis on original Monster, Horror and Science Fiction film photographs. Visit the Horror & Sci-Fi Photographs Category. You will be pleased by the friendliness and knowledge of our staff. The item “King Kong Cast Photo 1933 On Set Merian C Cooper, Bruce Cabot RKO Pictures” is in sale since Friday, April 12, 2019. This item is in the category “Entertainment Memorabilia\Movie Memorabilia\Photographs\Pre-1940\Black & White”. The seller is “oxxbridgegalleries” and is located in Allendale, New Jersey. This item can be shipped worldwide.