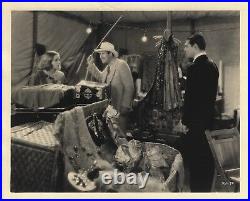 GRETA GARBO VINTAGE PHOTOGRAPH FROM SUSAN LENOX Estate of Greta Garbo from Garbos Personal Collection. Greta Garbo vintage double-weight photograph from Susan Lenox. This first-generation vintage gelatin silver double-weight matte print measures 8 x 10 inches. In vintage, very fine condition. This exceptional photograph comes with a Certificate of Authenticity that states this photograph is from “Garbos Garbos Personal Photograph Collection”. Susan Lenox (Her Fall and Rise). Is a 1931 pre-code film starring Greta Garbo and Clark Gable based on the novel by David Graham Phillips. It was the only film that paired Garbo with Gable. What makes this photograph an exceptional collectible? “Garbos Garbos” were taken by some of the greatest Hollywood photographers, including Clarence Bull, Arnold Genthe, George Hurrell, Ruth Harriet Louise and Edward Steichen. These photographs, part of the Hollywood studio publicity and marketing efforts, were used to promote the stars of Hollywoods Golden Age. “Garbos Garbos” comprise a stunning personal collection of her Hollywood career. Garbo understood the significance of this lavish collection and carefully preserved these photographs for herself and her family. “Garbo’s Garbos” are first generation prints. Garbo was given a copy of each portrait and set shot as part of her contract with MGM. A film’s set shot photography served an important role as part of a visual storyboard in the film production process. This MGM set shot is numbered with the film code for Susan Lenox (561) and is followed by an image number (38) which indicates the image’s sequence from the beginning of the film. This code appears in the lower right hand corner and it was etched into the original negative. First generation prints are exceedingly rare. In the production of her films, first generation prints were produced for Garbo, the film’s director, the film’s continuity three-ring binder and possibly an additional print might have been developed by the photographer. Consequently, in many cases, the only surviving pristine image of a particular set shot remains from within Garbo’s personal collection. This photograph is made available by a family member. AN EXCEPTIONAL COLLECTIBLE. If you acquire this photograph, you will know that you possess one of the images she personally treasured and preserved over her lifetime. For any photograph collector or Garbo fan, this item is a must have from one of the greatest actresses (four Academy Award nominations for Best Actress) and a Hollywood legend (1954 Academy Award for Unforgettable Performances). Additional honors include Time Magazine voting her Best Silent Actress of the Century in 1950, and the Guinness Book of World Records listing Garbo as the most beautiful woman who ever lived. Perhaps this excerpt from Thomas Ince in Photoplay (October, 1928) best captures the allure of Garbo. Five of us sat in a projection room when Greta Garbos first scenes the picture was Ibanez The Torrent were thrown up on the screen. So far as the screen went, Miss Garbo was an unknown quantity. Would she or wouldnt she? Did she or didnt she? A thousand feet of film sped by, and then another thousand. Then more film, and still more. Finally the lights flashed up. One of the men ground his cigarette into the floor with his shoe. But two roles in life are open to that lady, he said. She can act, or she can start a new religion. So far as results go it wont make much of a difference. Is made through the. The item “GRETA GARBO VINTAGE STUDIO PHOTO Susan Lenox From GG’s Personal Collection COA” is in sale since Saturday, October 10, 2020. This item is in the category “Entertainment Memorabilia\Movie Memorabilia\Photographs\Pre-1940\Black & White”. The seller is “gretagarboestate” and is located in Mill Valley, California. This item can be shipped worldwide.