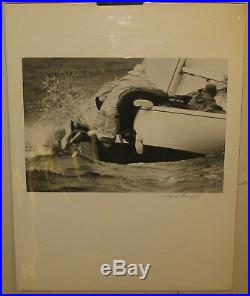 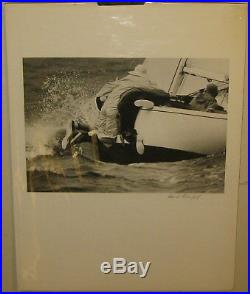 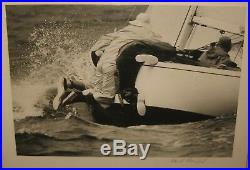 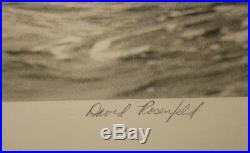 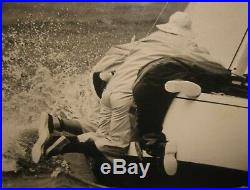 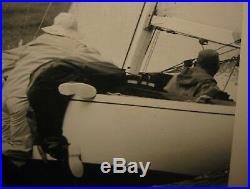 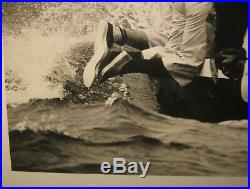 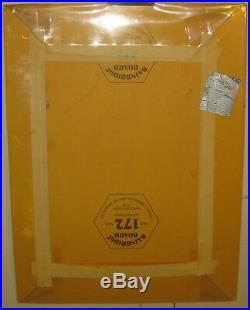 This is just a great original piece. For those that follow my store, you probably have realized that I have been offering a lot more high quality photography lately. I have long been a collector of photography and have seen the collecting area getting stronger and stronger. If you collect photographs, you should definitely check my store as I have just listed some wonderful valuable works. This is one of a group of Rosenfeld photographs I picked up from a New York dealer last month. Two are by the master photographer, Morris Rosenfeld, and then I got others by his son, David. For those not familiar with David Rosenfeld I have included his biography below. This is a wonderful large gelatin silver view of a couple sailors holding down the sailboat. Photograph measures 9 1/4 x 13 1/4 inches. Photo is in outstanding as created condition. Laid down on its original matte. Signed in pencil below the image lower right on the mount. This photograph is still wrapped in cello and even has the original price in pen on the back. Really one of the best by the photographer. I have others from the museum series as well as a couple of his sailing works as well. Other great photography as well. For those not familiar with David Rosenfeld his biography from the Mystic Seaport Museum reads: David, eldest son of Morris and Esther Rosenfeld, was born in 1907 and died in 1994. Transcripts from Mystic Seaports Audio Visual library and tape transcripts from his daughter, Adelaide Rosenfeld Bialek, were used to create this biographical sketch. As time went by I started to get paid, fifty percent of my salary went to room and board. That was from 1920 when I was thirteen until 1931 when I got married. I paid my college tuition (New York University) from the 50% of my salary that I received. Sometimes the thumb was the only way to get home. My father never gave me a new camera. I always got one he had used, that he had, in his words, broken in to work great. Unfortunately, on two occasions, broken in meant broken down, and I lost one important assignment, and a helping hand saved the other. David married Adelaide Rodstrom in 1931. Her family were neighbors of the Rosenfelds on City Island. Her brother Charlie Rodstrom was a close friend of David. Another friend of Davids was Henry Frapwell who had a younger brother Douglass who later married the Rosenfeld brothers sister Eleanor. In the late 1930s (1937) I began teaching photography at Metropolitan Vocational High School where I was Chairman of the Photography Department. The school schedule and location complimented my work schedule at Rosenfeld. Each day after school I worked at Rosenfelds Nassau Street office, spring and fall weekends I worked from City Island. During the summers I worked full time. My Father and I both lived on City Island, the FOTO was moored there, and we each had darkrooms in our homes. During World War II David was a teacher but at the same time also worked with Morris photographing projects for the Navy. He also took identification pictures for the shipyard workers who were cleared to build for the Navy on City Island. Davids daughter wrote, I remember the dinette at the back of our home on Pell Place converted to a studio with a steady stream of men coming in to be photographed. Up through the 1960s Davids work would sometimes appear in Yachting, Life, Readers Digest, Popular Photography, Rudder, Motorboating, and The New York Times. This work included stories about, going down the Mississippi on a cruise, the Pan-American games in Chicago and unusual construction of wooden hulls. In 1960 David transferred to the High School of Art and Design in Manhattan and became an Assistant Principal until 1971. David spoke of the fact that Morris refused to allow anyone, including his own sons to publish anything under their own name. My father was very jealous of the fact that all of the photographs taken went out under his name. He would never consider Morris Rosenfeld and Sons. It was a standard joke that we would look in a magazine and there were photographs taken in Florida, taken in Bermuda, taken in the Middle West, taken in Maine, all taken by Morris Rosenfeld. People used to comment, He sure does get around. And I said, Very easy when you have three sons getting around for you. At one time David provided photographic illustrations for a number of art books and co-authored a book on photographic technique with Ben Clements, a teacher at New York University titled, Photographic Composition, published by Prentice-Hall, 1974. David brought his expertise to the Collection through his excellence in darkroom work. In this area, he was a truly an artist. CHECK THE PICTURES ON THIS GREAT PIECE. DONT MISS THIS OPPORTUNITY. If you have any questions regarding the work, please dont hesitate to ask. Pictures are an excellent indication of condition. I guarantee and stand 100% behind everything I sell. No reason to open up any sort of cases. Just simply contact me and I will handle any and all problems. The item “Original Vintage DAVID ROSENFELD’Sailboat SAILORS Ballasting BOAT’ PHOTOGRAPH” is in sale since Monday, August 20, 2018. This item is in the category “Art\Art Photographs”. The seller is “pmfeld” and is located in Holliston, Massachusetts. This item can be shipped worldwide.