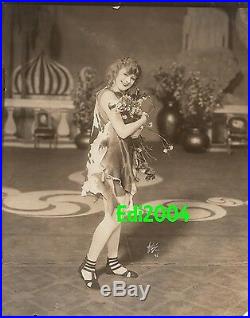 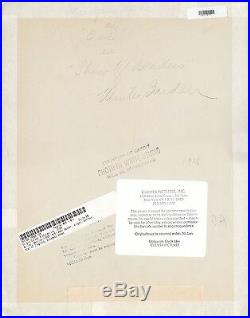 Taken in 1916 during the Broadway Show run of “SHOW OF WONDERS”, in which MARILYN MILLER played the role of “Eve”. She is only 18 years old in this photo and is before her well known Ziegfeld Follies days, which is quite RARE to find such an early photo of her. The 1916 performances of “SHOW OF WONDERS” was performed in the WINTER GARDEN THEATRE located at 1634 Broadway between 50th and 51st Streets in midtown Manhattan, NYC. On the back of the photos are multiple stamps and markings. There is a black “Photo by White Studio” stamp. Also on the back of the photo, handwritten lightly in pencil is “Marilyn Miller as Eve in Show of Wonders Winter Garden 1916″. Please see the scanned image for full details. On the front of the photo, White Studios stamp in white ink is in the negative in front of her ankles on the right of photo. Photo is in FAIR condition, however, good for a photo 99 years old. There is significant edge wear and some creasing in the borders and corners. There is a small chip missing in the lower and upper right corners. There is some small paper loss in the upper center border area. If one looks inside the borders and corners of photo, the photo is in Very Good Condition. Great Resolution and Focus. This is a VINTAGE ORIGINAL Photo and NOT a Reproduction Restrike. The item “MARILYN MILLER Vintage Original RARE Photo 1916 SHOW OF WONDERS WHITE STUDIOS” is in sale since Thursday, April 2, 2015. This item is in the category “Entertainment Memorabilia\Movie Memorabilia\Photographs\Pre-1940\Black & White”. The seller is “edi2004″ and is located in Carrollton, Virginia. This item can be shipped worldwide.