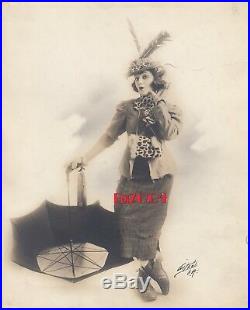 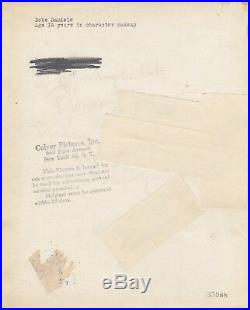 On front of photo (see picture). The back of the photo has typed “Bebe Daniels – Age 14 years in character makeup” so since she was born in January 1901, the photo dates to 1915. Note: I have reduced the price from 349.99 to 199.99. The imdb database tells us, Bebe Daniels toured already at the age of four in a stage production of Richard III the US, she had her first leading role at the age of seven and started her film career shortly after this in movies for Imperial, Pathe and others. With 13 she was Harold Lloyds leading lady in the “Lonesome Luke” comedies. She stared in movies of DeMille and later for Paramount. After the arrival of sound, she had no problems with this fact because she had a beautiful singing voice and so she became a major musical star, with such hits like “Rio Rita” and “42nd Street”. In 1930 she married Ben Lyon, with whom she went to England in the mid 30s, where she became a successful Westend star and with her husband a famous radio team. Her movie career drifted away after the mid 30s. There is a small pen mark near the right lower border and another faint scrolling mark to the right of Bebe’s head. This is a VINTAGE photo and NOT a REPRODUCTION restrike. All reasonable offers will be considered. The item “BEBE DANIELS Vintage Original DW Photo ALBERT WITZEL age 14, 1915 Very Rare” is in sale since Tuesday, November 3, 2009. This item is in the category “Entertainment Memorabilia\Movie Memorabilia\Photographs\Pre-1940\Black & White”. The seller is “edi2004″ and is located in Virginia Beach, Virginia. This item can be shipped worldwide.