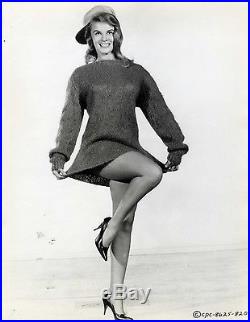 ANN-MARGRET / BYE BYE BIRDIE (1965). Vintage original 14 x 11 35 x 28 cm. Black-and-white double weight glossy silver gelatin print still photo, USA. Dick Van Dyke, Ann-Margret, Janet Leigh, Bobby Rydell, Jesse Pearson, Paul Lynde, Maureen Stapleton, dir: George Sidney; Columbia. Popular musical about a rock singer who travels to a small town to make his farewell performance before going off to the draft, and the lucky girl who gets to kiss him goodbye on the air. In her second film, Ann-Margret played the dancing, singing teen girl who won the contest. Because he was so enamored with her, director George Sidney made Ann-Margret’s character more the star of the piece much to the dissatisfaction of original Broadway cast members Dick Van Dyke and Paul Lynd. An entire opening and closing musical sequence was added by Sidney featuring Ann-Margret. The film made her a new star and she posed endlessly for cheese-cake photos such as this one. It is coded “cpc-8625-820″. Minor curling, minor crease at top left corner. It must come back in the same condition as it was sent. AUTHENTICATION: My name is Walter Reuben. I have been collecting movie posters since 1978. I have been a full-time dealer since 1982. Everything I sell is fully researched and entirely guaranteed to be completely authentic and as described. A lifetime of experience goes behind every description of every piece I offer. ABOUT ME: For further information, go to the ABOUT ME. The item “ANN-MARGRET / BYE BYE BIRDIE (1963) Vtg orig 11×14 dbl wt glossy pin-up portrait” is in sale since Saturday, February 21, 2015. This item is in the category “Entertainment Memorabilia\Movie Memorabilia\Photographs\1960-69\Black & White”. The seller is “walterfilmusa” and is located in Los Angeles, California. This item can be shipped worldwide.